The History of Glastonbury Festival

Glastonbury Festival was started by founder and somerset dairy farmer Michael Eavis back in the 1970’s. Michael apparently had the idea to create a festival while watching a Led Zepplin gig at the open air festival ‘Bath Festival of Blues and Progressive Music 1970’. 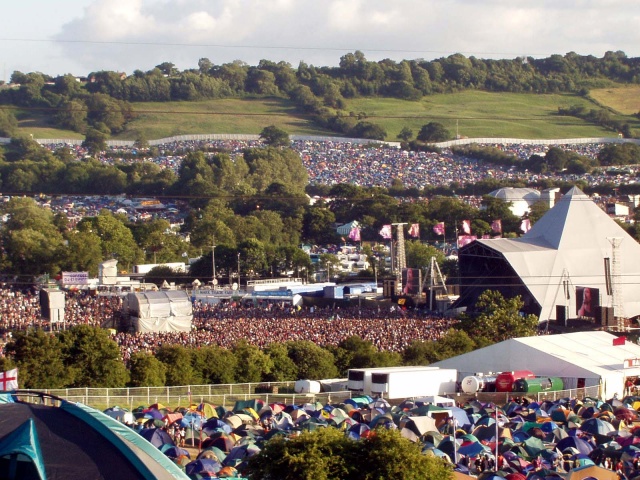 The first festival that he put together was a two day event that started on September 19th 1970 which was the day after legend Jimi Hendrix died (very sad day for music lovers).  The first Glastonbury festival was called the ‘Pilton Festival’  which later changed its name to ‘Glastonbury Festival of Contemporary Performing Arts’.  The estimated attendance for the 1970 festival was around 1500 people which in today’s standard is not many at all!

The hippy movement was still going strong at this time and so the hippy ideas of the free festival movement and free spirit and hippy clothing ran strong through the festival scene.  I have mentioned the free festival movement but the first Glastonbury festival was not a free event although compared to today festival prices it was almost free.  For the meagre price of £1 you received entry as well as free milk from the farm. Mmmm yummy.  Now you  can’t say fairer then that.

In 1971 Glastonbury Festival moved to the 20th-24th of June which co-insides with the summer solstice.    This time the festival was better known as the ‘Glastonbury Fair’.  Entrance to this festival was free as the event was paid for by the few who supported the ideal of a non commercialised or less commercialised festival as most festivals were and still are heavily commercialised.  It may surprise you to know that Michael Eavis had little to do with this festival the two main organisers were Andrew Kerr and Arabella Churchill.

This was the year in which the first ‘Pyramid’ stage was constructed.  The position of the stage was placed on a site above the Glastonbury-Stonehenge ley line and was made from scaffolding and plastic sheeting.  This time around an estimated 12,000 people attended the festival to watch such acts as Joan Baez, Fairport Convention, Hawkwind and David Bowie. All of whim are amazing legends.

It wasn’t until 1978 that another festival took place albeit a badly organised and impromptu occasion.  Believing a festival had been organised travellers who had been celebrating the solstice at Stonehenge arrived at the Glastonbury Festival site to find nothing was going on.  After much debate and some gentle persuasion a mini festival took place with only an estimated 500 in attendance and a stage powered by an electric meter from a caravan.

In 1979 Bill Harkin and Arabella Churchill convinced Michael Eavis to provide financial backing.  He secured a bank loan against the deeds of the farm.  An estimated 12,00 people attended paying £5 a ticket, despite the turnout there was a huge financial loss.  Consequently no one wanted anything to do with a festival in the summer of 1980. Look at it now though….

It wasn’t until 1981 that Michael took the reigns back and decided to do things properly.  This was the year that I’d say started the creation of the Glastonbury Festival we know and love today.  The Pyramid stage was rebuilt as a permanent structure from telegraph poles and ex-MOD metal sheeting.  During the winter months the stage was used as a cowshed  and animal food store.  The  CND (Campaign for Nuclear Disarmament) helped with advanced ticket bookings and sent out information in the mailings.  The involvement of the CND made this the first Campaign for Nuclear Disarmament Festival.  An estimated 18,000 people paid £8 a ticket to attend.  Michael had worked out a way to create his festival vision and a way to create a profit.

From this point on a blueprint had been created for what Michael envisioned.  In 1983 the local government act became law and so a licence was needed to hold the festival.  A Public Entertainment licence was granted for the site with a crowd capacity of 30,000 people.  This event sold out at £12 a ticket.  This was the first year the festival saw its own radio station, Radio Avalon broadcast.

From this point on Glastonbury Festival became a yearly event with few breaks.  Glastonbury Festival has become one of the worlds best known and widely anticipated festivals.  With hundreds of thousands of people trying for tickets every year.  If there is one place you need to go then Glastonbury festival really is that place. Beforehand however, make sure that you pack your favourite hippie clothing.