Ethnic Clothing is here at Mystical Mayhem Hippy Clothing and Gifts. This page is to let you know that stock a wonderful range of Fair Trade ethnic styled clothing.

Being a hippy is all about mixing clothing designs, style and colours born from many different cultures. We don’t believe that any one person, if they do not wish to, should stick to wearing any certain style of clothing. Clothing is how we express ourselves. For some, wearing the same clothing day in day out in the same style is fine but, others like us hippies like to experiment. There are so many different cultures out there that have amazing clothing ideas that I think should be shared. Whether the clothing is plain and simple or intricate and elaborate there really are some stunning ideas out there. This is why we use the producers that we do as they help us with this.

We have producers in Nepal, India, Bali, Thailand and others who all have different styles of clothing that we like to use, some traditional to that country or culture and others that have been designed from a mix of traditional and modern hippy 🙂 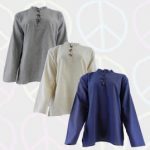 Mystical Mayhem Hippy Clothing sell some fantastic Fair Trade ethnic clothing from around the world.  Our two main countries of origin are India and Nepal however we also work with Indonesia, Mexico and Guatemala.  We love ethnic clothing as it stands out in a crowd, is mainly bright and colourful as well as looking individual.  We stock many hippy ethnic shirts, skirts, jackets and much more.  We cater for both male and females looking for that piece of ethnic clothing that is a bit different.  Our hippie clothing range is ever growing so week in and week out we have many new designs and styles, hopefully you’ll like something we have.