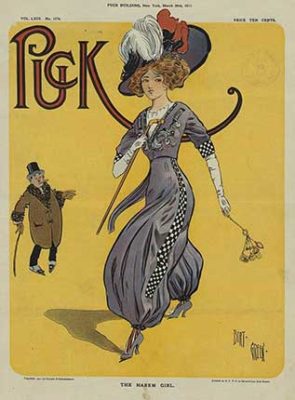 Harem pants (also known as harem trousers) have been around a lot longer than you might have thought.  Although the harem pant has had many come backs through the years these trousers were first seen in the Kingdom of Persia approximately 2,000 years ago. The pants were worn by women among different middle-eastern tribes to represent modesty and innocence. This can be seen through the style and design of the original harem pants. They resembled what we would know as bloomers by being very loose around the hips and legs thus for hiding the feminine body shape.

Harem pants are a huge part of the hippy clothing lifestyle. This hasn’t always been the case but as with everything else, they have evolved over he years into the wonderfully funky trousers that we know today.

Harem slacks are baggy, long pants caught in at the ankle.  Early on, the style was also called a ‘harem skirt’as you will notice the trousers do very much resemble a skirt. We love this here at hippie clothing uk. A great way to look like you have chosen to wear a skirt but have the warmth of trousers.

This style of trousers in one of its first and original forms made it onto the western scene in the 1800s. So as you can see, they have been around a while!

In 1851, Amelia Bloomer who was an American women’s rights and temperance (refrain from drinking anything alcoholic) advocate hosted a gathering. To this gathering, came Elizabeth Smith Miller and what an impression she made. Indeed! She attended wearing a “Turkish dress” aka Harem Pants. The very next month Amelia announced to her readers that she had adopted and was wearing the dress. After many inquiries, Amelia then printed a description of her dress and instructions on how to make it.  Soon after, many newspapers had dubbed the newly adapted Turkish dress as “Bloomers”.

Even though she did not create the women’s clothing  style known as bloomers, her name became associated with it because of her early and strong love of the garment. Pants had not been worn by women in public before this time period. They illustrated the gender boundaries they intended to break and were worn by many of the feminine groups who decided to take a stand. These groups included the suffragettes.

The trousers as we know them today look very different to the original form. Unfortunately the women’s movement weren’t wearing bright coloured funky hippy trousers. I think that would have sent the world over the edge at that time! They ones that they wore were generally light coloured. Possibly with some fine detail around the ankle and waist band.

The Bloomer was a major symbol of women’s rights movement in the early 1850s but after three years of wearing the dress and fearing that the new dress was drawing attention away from the suffragist cause, many of these women returned to corsets, long skirts, and more conventional forms of clothing.

We have mentioned that in the 1800s the harem trouser was first introduced to western society but it wasn’t until 1900s that the style moved on into a more middle eastern style.

In 1911 the Paris couturier Paul Poiret introduced another version of the harem pants. This came as part of his efforts to reinvent and ‘liberate’ Western female fashion.  The trousers were inspired by Middle East styles, and by Turkish trousers known as şalvar.   The term ‘harem pants’ subsequently became popular in the West as a generic term for baggy trousers with elasticated ankles. Alternative names for the harem skirt/pants included jupe-sultane (sultan skirt), and jupe-pantalon (trouser-skirt). These designs were seen as controversial as Western women typically did not wear trousers. At the time as trousers were seen as a male piece of clothing. Oooh we hippies love a little controversy!


The way that Poiret used the imagery of harem pants was regarded as immoral as they sexualised women. Poiret himself said that it was he who had designed the style of pants and that he did so to enable women to be able to show off her form and suppleness. Well he succeeded as they sure do. They are a very popular item of clothing for belly dancers as they accentuate their curves.
It was suggested that the breeches, represented the point at which Western fashion began seriously changing. The point in which it began to challenge traditional cultural style and make them into something brand new. 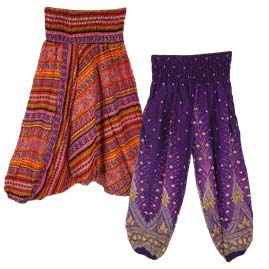 We love this style of hippy clothing as it has a timeless quality. It is a garment that has been around for so many years and in many forms.
We decided some time ago that we would try where possible, to grow our range of hippy harem pants into something quite special. We are very proud to present to you our very extensive range of hippie clothing harem pants. For you, we offer a wide selection for you in a host of materials from lightweight rayon to thick cotton. Plain, patchwork or bold designs, they are perfect for both men and women.
They are stylish, they are comfortable and did you know, there are more than one way to wear them?!
We are constantly getting new variations in and so, pop over and check them out.