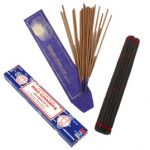 As is with many other words in the world, the word incense comes from Latin incendere  which means “to burn”. Makes sense really when you think about it. Incense is a blend of gum, spice, or other substance that is burned for the sweet smells they produce. Just by mixing some different spices etc together you can make some amazing smells.

At Mystical Mayhem Hippy Clothing and Gifts we sell traditional aroma joss sticks along with cones.  Most of collection is produced in Nepal using traditional methods that include hand rolling using natural ingredients.

Incense is aromatic and releases lovely fragrant smoke when burned. The term incense refers to the material itself, rather than to the aroma that it produces. Through the ages, this form of burning fragrance has been used for a variety of purposes. This include the ceremonies of religion, to overcome bad smells, repel insects, spirituality, aromatherapy, meditation, and for simple pleasure. These days’s we mostly use these perfumes in aromatherapy and for making houses and shops smell pretty amazing.

Most types need a base material to combine everything together and so, more often than not to keep the product au naturel, essential oils are used. Great binding agents and great smells.

Tibetan incense refers to a common style found in Tibet, Nepal, and Bhutan. These have a characteristic “earthy” scent to them.  The most common ingredients used in Tibetan varieties are cinnamon, clove, and juniper, to kusum flower, ashvagandha (also known as Indian Ginseng used in a variety of healings), or sahi jeera (black cumin).

Many Tibetan incenses are thought to have medicinal properties. Their recipes come from ancient Vedic texts that are based on even older Ayurvedic medical texts. The recipes have remained unchanged for centuries.  Our main range comes from Tibet, Nepal. The popular herd ashvagandha is used in many Ayurvedic  treatments.

Our hand rolled Tibetan sticks are made using ancient methods handed down over hundreds of years according to the ancient monastic tradition, this is made without a stick inside. This gives the perfume a deep, rich, earthy aroma rather than being overly perfumed or diluted by the less pleasant smell of a stick burning.  Many of the natural ingredients used in the production of these beautiful aroma sticks are harvested from the foot of Mt Everest.

Indian Incense stick and Indian style sticks also known as agarbathi (or agarbatti) and joss sticks. This is where a paste is rolled or moulded around a bamboo stick, is one of the main 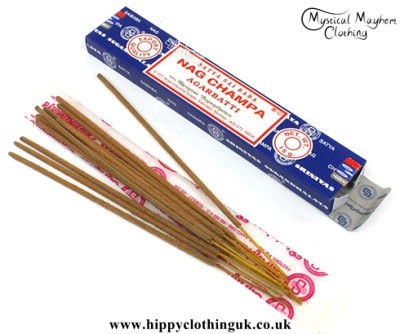 forms of incense in India. The bamboo method originated in India and is distinct from the Nepal/Tibet and Japanese methods of stick making. This is because these other methods do not use a bamboo core. Though the method is also used in the west, particularly in America, it is strongly associated with India.

The basic ingredients are the bamboo stick, the paste (generally made of charcoal dust and joss/jiggit/gum/tabu powder – an adhesive made from the bark of litsea glutinosa and other trees), and the perfume ingredients

How long has incense been in use?

Combustible bouquets were used by the ancient Egyptians, who employed incense within both pragmatic and mystical capacities. Incense was burnt to counteract or obscure malodorous products of human habitation, but was widely perceived to also deter malevolent demons and appease the gods with its pleasant aroma.

The use of this kind of fragrance in some form or another has been found in many prehistoric Egyptian tombs. One of the oldest extant incense burners originates from the 2494 to 2345 BC The Temple of Deir-el-Bahari in Egypt contains a series of carvings that depict an expedition for incense.

For direct-burning varieties, the tip or end of the stick is ignited with a flame or other heat source until it begins to turn into ash at the burning end. Flames are then fanned or blown out, with the fragrance continuing to burn without a flame on its own.

**WARNING** Please do not leave yours burning unattended.