Culottes have been around since at least the late 1700’s and over the years have seen varying forms of design.
Lady Diana Spencer made this style of trouser rather popular in the early 1980’s but unfortunately the trend petered out.
Culottes seem to now be making an epic comeback and we just love that here at Mystical Mayhem Hippy Clothing.

Culottes are essentially short trousers that end either just above of below the knees. The legs get wider at the bottom and are flared. Modernised somewhat, the now idea behind this is so that it looks like the wearing is actually in a skirt rather than trousers.

Originally worn by men only , the bottoms weren’t always flared. For a long time they were worn across the globe in various guises. They were a huge part of military dress across Europe worn by many army’s. Also they have been a status of class worn by upper class gentlemen from the late middle ages right through to the early 19th Century. Even worn by the first 5 presidents of the USA and by Samurai warriors.

The word culottes comes from the French word culotte which is derived from culot. Culot means “the lower half of something”.
Although the origins of the word comes from France, culottes as we know them are known as something different in France. These days to the French culottes means pants, as in underpants.

More often than not these days culottes are made as 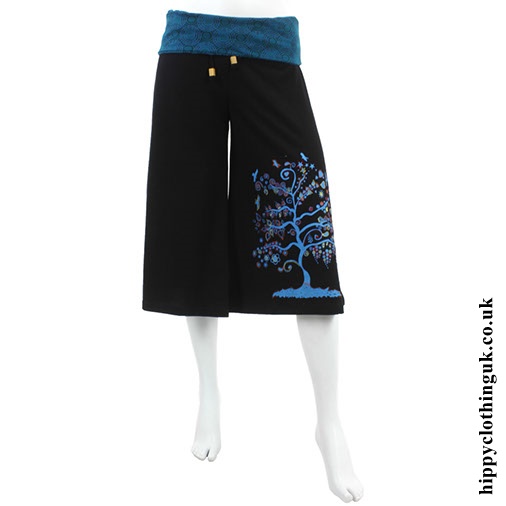 short trousers however different versions can be available. Take skorts for example which are used in exercise. They are a pair of shorts with a panel of material on the top so that it looks like a skirt which is the idea behind the modern take on the garments.

Here at hippie clothing HQ, our range is growing as and when we can find some more funky designs for you. We don’t want to sell the same as everyone else but offer the unique and colourful items that you have come to expect from us.
From lightweight rayon through to a nice jersey cotton we have something for everyone.