What is Flower Power?

You all will have heard, I’m sure,  of the saying “Flower Power”
Nowadays, we think of flower power as a staple hippy trend that’s a little bit retro and kind of sweet. But did you know that it originated as a form of peaceful protest? There are so many sayings that we take to over the years without knowing what they actually mean. It’s always good to do a little research.
Here’s a little bit on the history of flower power.

A brief introduction to Flower Power

Flower power was a saying/slogan used in the late years of 1960 and in the 1970s. It was used as a symbol of non-violet ideology in relation to the Vietnam war. The expression was first used in 1965 and was created as a means to try and transform the war protests happening at the time into peaceful demonstrations and displays.

The terminology originated in Berkeley, California. It was created as a symbolic action of protest and the ideal was created by poet and philosopher Alan Ginsberg. Ginsberg wrote articles advocating the handing out of flowers at protests. They were to be handed out to policemen, press, spectators, well everyone!

The symbolism of flower power was adopted and embraced by hippies who would dress in brightly coloured clothing covered in flowers which they had embroidered on. They would also wear flowers in their hair and would hand out flowers to the general public to try and spread the feeling of peace. During volatile times they would sing, they would dance and try to make people relax.  These hippie folk became known as the Flower Children. Did you know that Flower children is a known synonym for Hippy!

Flower children were all about promoting spreading love and not war. At demonstrations, as well as handing out flowers they would 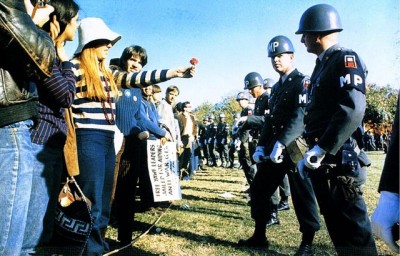 hand out balloons and sometimes even put on little theatre shows to try and reduce the fear and anger that is usually inherent at most protest rallies. They even created anti war literature that they could hand out. It was also well know that during said protests, the flower children would walk up to the soldiers they were standing against and put flowers over their bayonets and in the barrels of their guns!
The use of the term flower power became an integral symbol to the counterculture movement due to the fact that such protests received great and positive attention.

It was the custom of flower children to wear and give out flowers as a way to symbolise ideals of universal peace and love. They were the original hippy’s.
It was only later on that the term became generalised to mean hippy’s and the hippie movement.

The post-war baby boomers were young, free and hip. They wanted peace, and they made sure it showed. It showed in the clothing that they wore and in their actions. Their clothing is what we today call ‘hippy clothing‘.

But is flower power still relevant to today’s hippies? And, can we still pull off floral fashion? Yes and yes is the answer.
As hippies we are all about looking out for our fellow humans and promoting peace, love & light where we can. With regards to floral fashion, it will always be relevant. Perhaps not to everyone but to many of us! 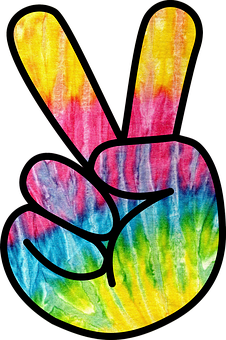 Say what you like about the state of the world today, but we are living in a time that is seeing a rise in the popularity of music festivals. Not only that but an interest in alternative living and spirituality, a return to community values. Flower children are still among us and always will be!

To this day it would seem hippy’s still love flowers and why not, they are beautiful and some of the types you get are pretty obscure and very funky!
Now there is a great word, funky! This word was given a new meaning by the hippy’s as they described their hippie clothing. Clothing that wasn’t supposed to go together but somehow did. They mixed patterns, chose colours that clashed and it looked great, well funky!